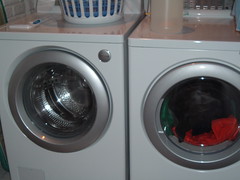 Last Load
Originally uploaded by bcmom.
We had to buy a new washer and dryer this summer because our old washer died. Of course, it was 13 years old so I suppose it served its purpose. Laundry had been taking longer and longer to do. When I first got my washer and dryer, I could do all of our laundry in one day. (every Monday -and we were using cloth diapers back then) Jeffrey would fold the last load, the towels, Monday nights after he came home from work. At some point in time I gave up washing the towels on Monday and moved them to Tuesday because things just weren't getting done. I had to run the dryer at least twice for every load, and sometimes more. We figured the dryer was just wearing out. Jeffrey cleaned the exhaust vent once or twice, and that helped a little, but it still took longer than it should have.

So when the washer died we figured it wasn't worth trying to get it fixed and just went and found a new set. We went for the high capacity, front-loading set by LG. The set is supposed to be matched up so that the dryer dries a load of clothes in the same time it takes the washer to wash a load - and these loads are big. What used to be 5 or 6 loads is now 3.

The new dryer has been working better than the old one, but it wasn't quite keeping up with the washer. A lot better, but not quite as good as it was supposed to be. So a couple weeks ago, Jeffrey took out all of the ductwork that vented the dryer to the outside and replaced it. Now, the dryer gets the whole load of clothes dry in less time than it takes the washer to wash the next load.

How cool is that? But now I'll have to decide - do I want to start washing towels on Mondays again?
Collapse